Diwali has a very special significance in Jainism, just like Buddha Purnima, the date of Buddha's Nirvana, is for Buddhists and Christmas is for Christians. Lord Mahavira, the last of the Jain Tirthankaras, attained Nirvana or Moksha on this day at Pavapuri on Oct. 15, 527 BCE, on Chaturdashi of Kartika:

Lord Mahavira is responsible for establishing the Dharma followed by Jains even today. According to tradition, the chief disciple of Mahavira, Ganadhar Gautam Swami also attained complete knowledge (Kevalgyana) on this day, thus making Divali one of the most important Jain festivals.

Lord Mahavira attained his nirvana at the dawn of the amavasya (new moon). According to the Kalpasutra by Acharya Bhadrabahu, 3rd century BC, many gods were present, illuminating the darkness[5]. The following night was pitch black without the light of the gods or the moon. To symbolically keep the light of their master's knowledge alive. 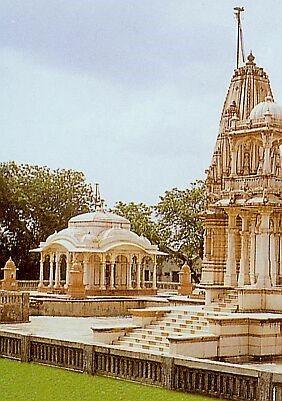 16 gana-kings, 9 Malla and 9 Lichchhavi, of Kasi and Kosal, illuminated their doors. They said: "Since the light of knowledge is gone, we will make light of ordinary matter" ("गये से भवुज्जोये, दव्वुज्जोयं करिस्समो").

The word "Divali" is a corruption of the Sanskrit word "Deepavali" (also transliterated as "Dipavali"). Deepa/dipa means "light of the dharma", and avali means "a continuous line". The more literal translation is "rows of clay lamps".

Deepavali was first mentioned in Jain books as the date of the nirvana of Lord Mahavira. In fact, the oldest reference to Divali is a related word, dipalikaya or deepalikaya, which occurs in Harivamsha-Purana, written by Acharya Jinasena [6]and composed in the Shaka Samvat era in the year 705.

Translation: The gods illuminated Pavanagari by lamps to mark the occasion. Since that time, the people of Bharat celebrate the famous festival of "Dipalika" to worship the Jinendra (i.e. Lord Mahavira) on the occasion of his nirvana.

The way Jains celebrate Divali is different in many respects. There is a note of asceticism in whatever the Jains do, and the celebration of Divali is not an exception. The Jains celebrate Divali during the month of Kartik for three days. During this period, among the Shvetambaras, devoted Jains observe fasting and chant the Uttaradhyayan Sutra, which contain the final pravachans of Lord Mahavira, and meditate upon him. Some Jains visit Pavapuri in Bihar where he attained Nirvan. In may temples special laddus are offered particularly on this day.

Non-violence is the highest religion

Find out more how you can Connect with Melbourne Shwetambar Jain Sangh to enhance your spiritual experience.